Groucho Marx once said that he never wanted to belong to any club that would accept him as a member. I feel a similar skepticism about being part of a club I never asked to join. But my 1983 birth grants me membership in what demographers and marketers now call “millennials.” Like every generation, our predecessors say we’re spoiled and self-absorbed—Timemagazine dubbed us the “Me Me Me Generation.” A generous history may one day overlook our need for constant validation and safe spaces, but for now, the cliché of being over-parented, over-schooled, and over-protected isn’t completely off base.

We never had a summer of ’67, where we tuned in and dropped out, nor a May of ’68 or March of ’89, where we seriously challenged the social order. Instead, our tender sails were rigged on self-esteem culture, and were launched amidst the collapsing scenery of the Great Recession. So we delayed home-ownership, marriage, and children; moved to the city; and spent our first decade’s harvest on our experiences: travel, careerist-festivals (SXSW, Art Basel, TEDx), and second-wave artisanal coffee—but not stuff (and not golf either, for some reason). We traded boomer materialism for a new kind of lifestyle consumerism.
On the art scene, we socialized, gossiped, and Instagrammed, but never actually bought many pictures—until now. A new survey of high-net-worth collectors by my company, U.S. Trust, reveals that our latency period is finally ending. Millennials are settling down, finding our financial footing, and beginning to collect. 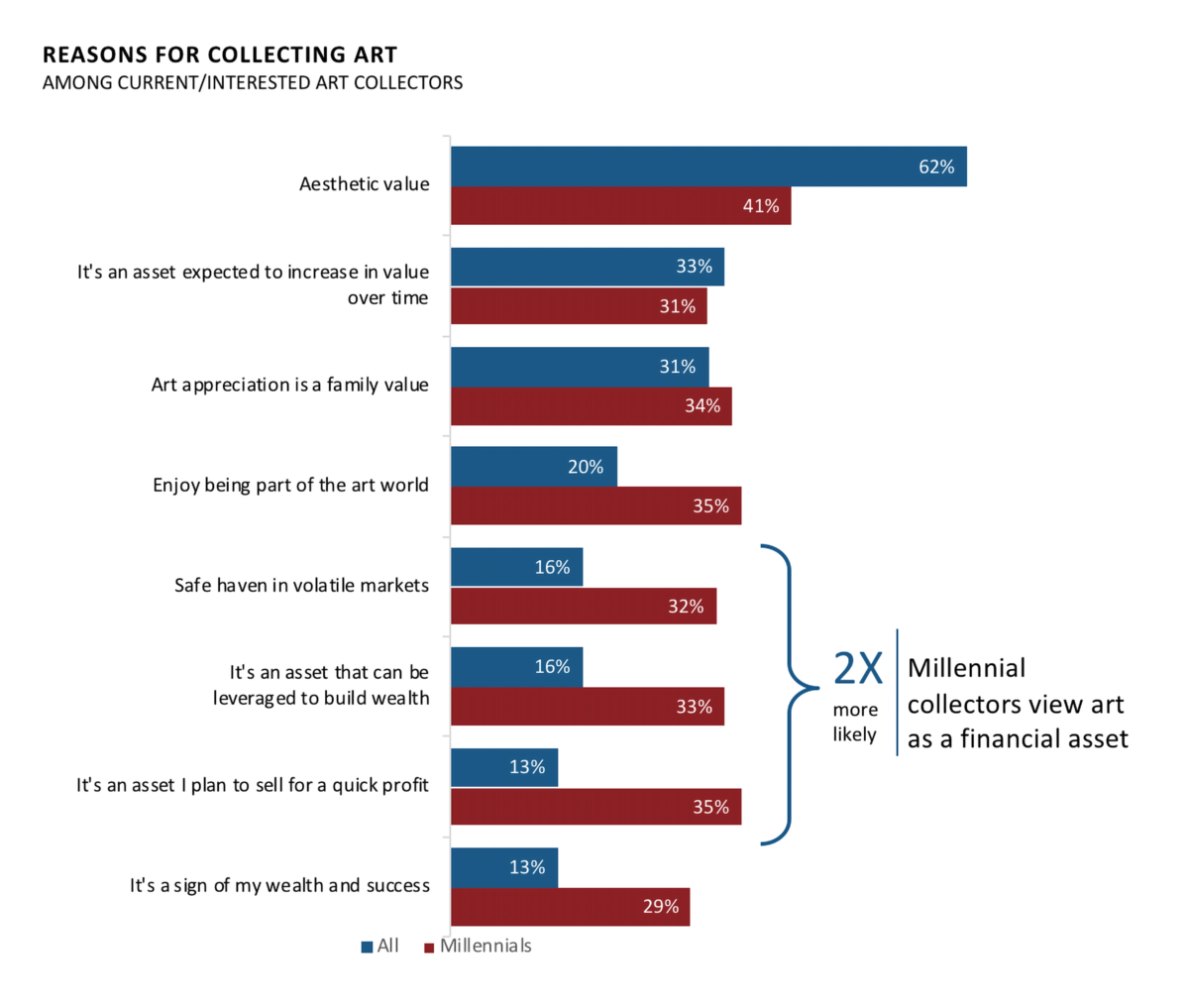 In the past two years, we’ve become the fastest growing segment of collectors (though we still represent only a tiny sliver of sales). In my observation, we fall into two camps: wealth inheritors, and a burgeoning group of rising private equity, real estate, and hedge fund professionals (the young tech elite still don’t collect).
As the degree-inflation generation, we’re far more likely to have received financial gifts towards our success. We’re curious and ambitious, but not all that rebellious or revolutionary. We’re more likely to obey authority, and we basically operate within the system. Ours is a cautious careerism geared towards our self-actualization. Our conformity annoys boomers like David Brooks of the New York Times, who calls us “morally inarticulate” and unconcerned with classical virtues.
And he may have a point. The great ideological struggles of the 20th century were less immediate to us. We grew up in a comfy post-Cold War liberal consensus and focused on our feelings. Sure, we debate tax rates and social policy (and sometimes march), but we’ve basically accepted our commercial republic. Unsurprisingly, then, we collect like capitalists.

What does that mean? We’re more transactional and more attuned to how our art behaves as a capital asset. We’re three times more likely than boomers to sell works we’ve collected (85% to 24%), and more comfortable using our art as loan collateral. Still, we don’t collect for investment. We’ve simply had to become more enterprising if we want to own the influential art of our time. “I collect because it enriches my life, but it’s certainly become more difficult to on-ramp into collecting,” says to Nilani Trent, a 30-something art advisor and early collector of artists like Tauba Auerbach, Kehinde Wiley, and Mickalene Thomas. “It now requires $50,000 to acquire even the youngest, most untested artists.” Collecting serious art for aesthetic pleasure, even for the super-rich, now takes some ingenuity. Our venture mindset is merely a response to the market’s new structure.

But it’s not all about the money for us. We were told, without irony, that we could be anyone we wanted to be, so we now bring a sense of idealism to our investing and collecting—boomer rebellion has given way to making a difference. We’re far more likely to care about the social impact of our investments, and three times more likely than boomers to consider our art collecting a part of our philanthropic aspirations (89% to 27%).
Sarah Arison exemplifies the new, more socially conscious collector. As Chair of the Board of Trustees at YoungArts and a trustee of both the Museum of Modern Art and the Brooklyn Museum, she thinks of her collecting as a part of her broader philanthropy. “I collect a lot of works from young artists who go through the National YoungArts Foundation program,” says Arison. She adds that becoming part of her collection “can create an impact for them in furthering their career.” We’re seeing more collectors finding ways to infuse their collecting with meaning. 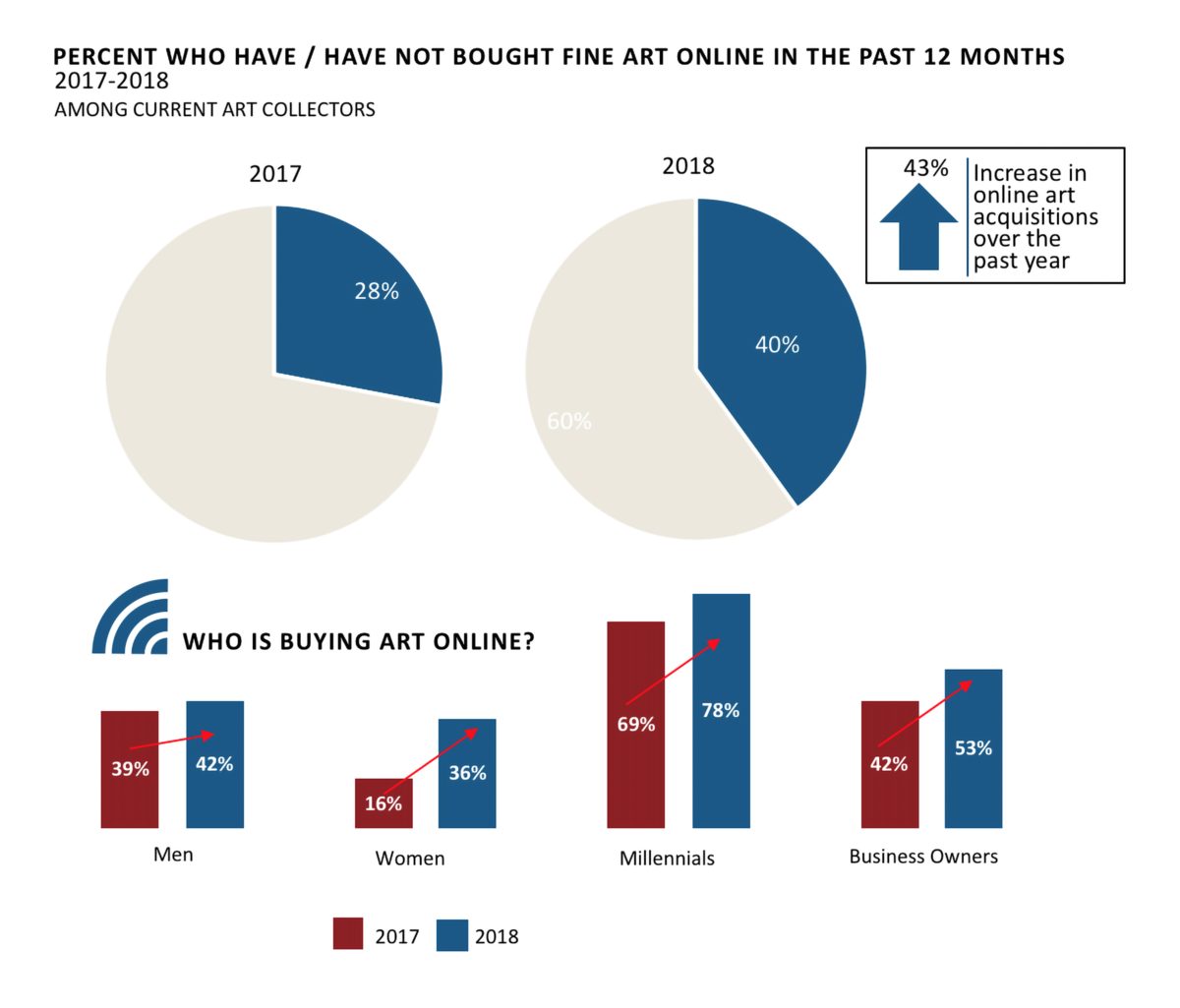 A lot has been made about our digital nativism—our isolated, overexposed, decreasingly religious existence—that has made us more susceptible to self-help guruism, overheated TED talks, and utopian rhetoric about AI this and blockchain that. But although we speak in code—V, AF, JK, TBH—and increasingly buy art online, technology’s effects on our collecting will be subtle.
We’ll use technology to co-opt art to enhance our personal brands—not so much in our real lives, but in our digital avatar lives on social media. Trent says that Instagram “has been the real game-changer for the art world.” It’s the perfect mix of visual and social. She notes that “for the first time, a completely open awareness exists about who owns and who collects what.” This hyper-connected transparency may benefit the market, but it might also imbue our collecting with a herd mentality, defined by insta-trends, branding, and channel buzz (try and find a hedge fund manager today not looking to acquire a George Condo).

There is one mega-trend that my generation may end. If 19th-century art was about beauty and the 20th about concepts, the 21st century has been about identity. Earlier this year, I attended an acquisitions committee meeting at a West Coast museum. Each curator had five minutes to make a Shark Tank-style pitch to trustees on why endowment funds should be spent on their chosen work. As the session wore on, I was struck by how little was said about the actual art. Every pitch focused on the artist’s biography: race, sexual identity, feminist credentials, overcoming hardships; nothing on composition, form, or historical context. To be sure, this approach is part of a broader (and overdue) reexamination of minority and female artists by boomer curators and collectors. But I think the moment is short-lived. Our M.O. is inclusion—leaning in, wokeness, the ever-expanding LGBTQIAPK spectrum. We think Kerry James Marshall is a damn good artist, not a damn good black artist. And as we become a dominant collecting force, identity will become less of a novelty, and art will again be judged on its own aesthetic merit.

What this means for the art market

Get used to our attention deficit disorders. “Collectors aren’t sellers” is no longer a thing. It’s my generation that Equinox Fitness is targeting with its new “commit to something” tagline. Galleries will need to adapt to our trading mindset. Dealers will need to become less coy around pricing and more accepting that we may want to—gasp—sell. We lack high regard for social standing (unless it’s a celebrity), so the art world, especially gallery personnel, will need to become less affected. We value convenience, which means that it’s time to get to work on that virtual reality feature so we can attend your London opening from Lagos or Los Angeles via our iPhones. As a visual generation, we consume an endless stream of JPGs, GIFs, memes, graphics, and images. But if we’re going to become a generation of great collectors, now we need slow down and learn to just look.
Evan Beard is the National Art Services Executive at U.S. Trust, Bank of America Private Wealth Management.
This content represents thoughts of the author and does not necessarily represent the position of Bank of America or U.S. Trust. U.S. Trust operates through Bank of America, N.A. and other subsidiaries of Bank of America Corporation. Bank of America, N.A., Member FDIC. © 2018 Bank of America Corporation. All rights reserved.