Following the continued rise of cross-category collecting in 2020, auctions featuring property from various departments continue to increase in volume. LVH Art explores the history and the financial pragmatism of this collecting technique.

Throughout history, a variety of collecting techniques have been put in place in relation to the time of their creation. The term cross-collecting has been gaining increasing popularity over the 21st century due to its frequent association with renowned art dealers such as Axel Vervoordt and Lawrence Van Hagen, and its growing presence in art fairs such as Masterpiece or Tefaf. Moreover, its financial pragmatism mirrors contemporary investment techniques such as portfolio diversification and hedging. 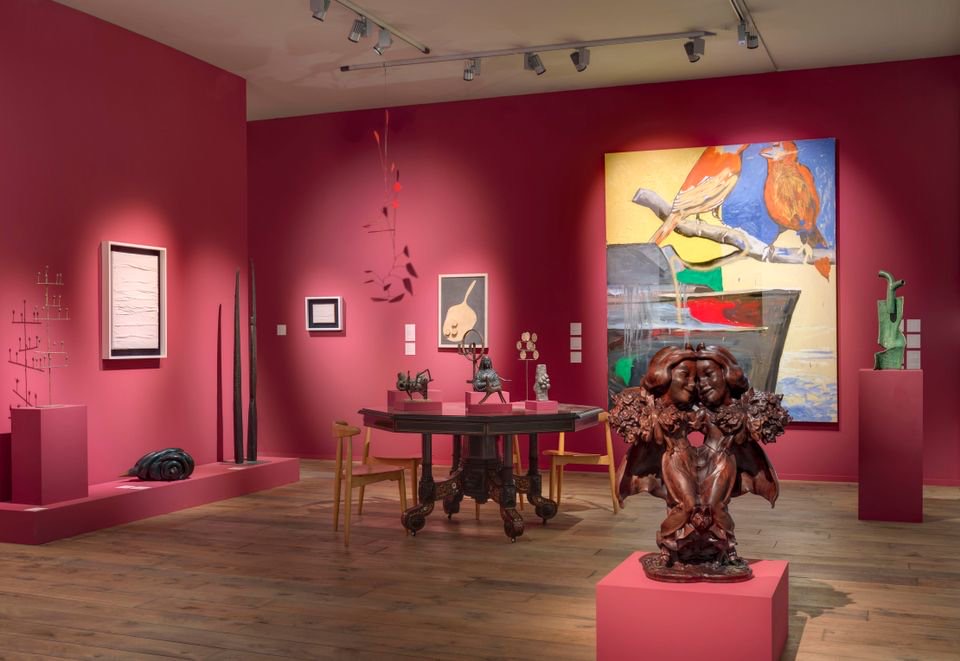 Nevertheless, what exactly is cross-collecting? The practice of cross-collecting (or cross-buying) can be understood as the notion of collecting artworks across a range of categories. From a contextual point of view, it is a curatorial exercise that makes associations, between objects and artworks from different movements, mediums and time frames, following the taste and vision of the curator. Although it might seem as the term has come to prominence in recent years, cross-collecting is nothing new, indeed this practice has been around since antiquity.

‘Cross-collecting is not just assembling artworks together from different genres but is a contextual well-curated juxtaposition of artefacts that stimulate the imagination.’

The term of cross-collecting is historically recognised from Ancient Roman times up to today. The practice started to flourish during the Renaissance (15th – 16th Century), a historical period known for its cultural expansions and discoveries. Indeed, the collectors of that time were already attesting to the fashion of mingling art from various earlier periods shoulder-to-shoulder with contemporary artworks, rare books and manuscripts into what the “Wunderkammer” (the room of wonders). 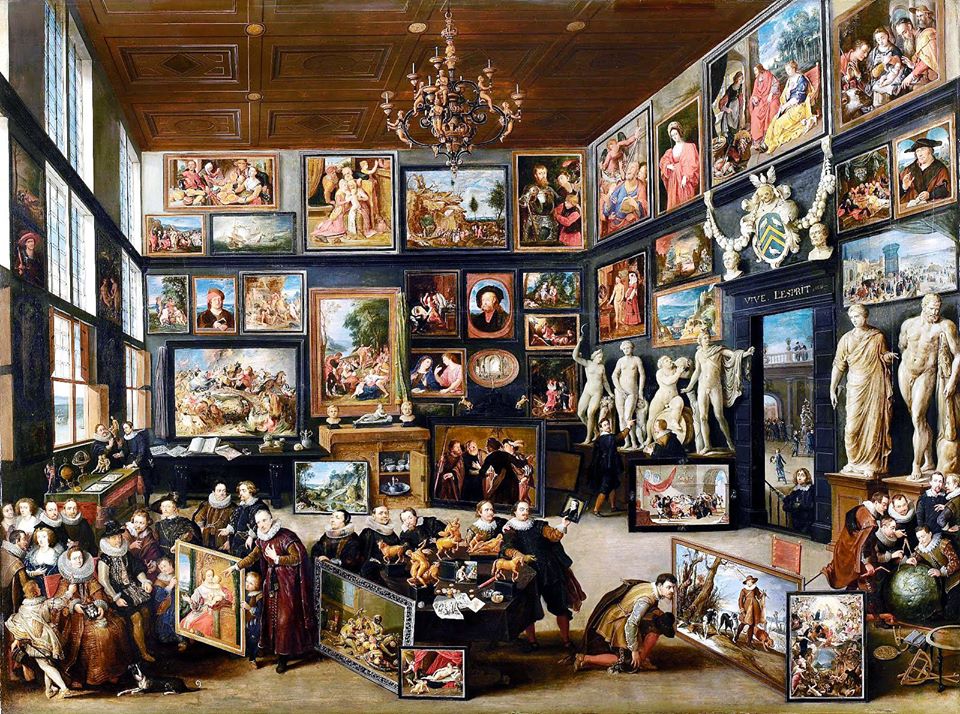 However, this collecting practice started to diminish during the 19th century due to the increase of scientific studies of nature. The tendency of categorising objects and artefacts together in groups of chronological periods and genres became popular amongst the public sector, which applied this model to museums and public institutions for educational purposes, categorising each section into clear divisions based on genre, movement and time frame. Consequently, curatorial practices in the 20th centuries were often mirroring this model and collectors were prone on building their collections around one single movement, such as Contemporary Art, Baroque Painting or Old Masters.

In contrast against the isolation of individual art forms, the German concept of the “Gesamtkunstwerk” (total work of art) rose to prominence during the 19th and20th centuries in Germany and Austria. The term was first popularised by the music composer Richard Wagner who argued that “not one rich faculty of the separate arts will remain unused in the “Gesamtkunstwerk” of the future”. The concept meant embracing all the different art disciplines into one creative language through the use of an architectural framework to create the most successful form of creative expression. During the early 20th century, a range of European art movements adhered to the model, such as The Vienna Secession and The Bauhaus. 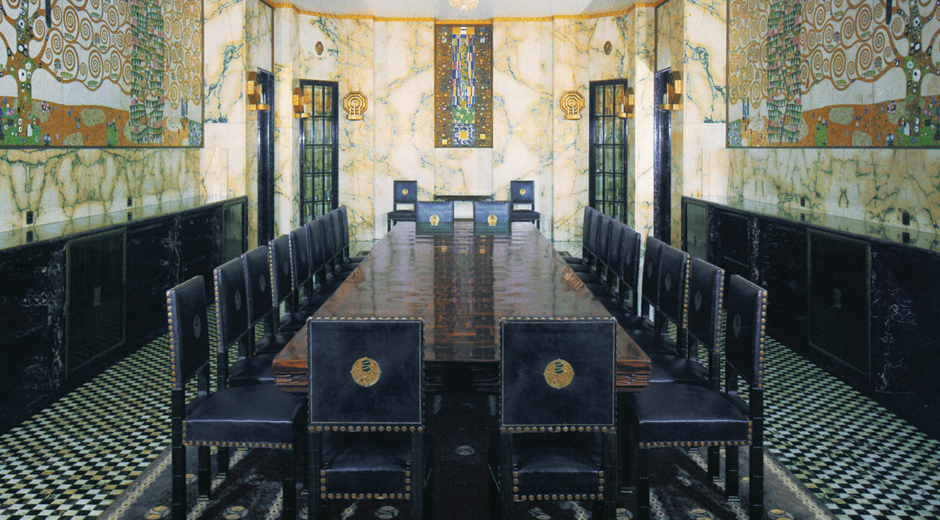 The Palais Stoclet (1905-1910) in Brussels integrated artists, architects and artisans to create the ultimate Gesamtkunstwerk. The UNESCO mansion was envisioned by art collector Adolphe Stoclet and architect Joseph Hoffmann, who worked in collaboration with artists Gustav Klimt and Franz Metzner to create a home where all aspects had to be cohesively designed. The project resulted in a total work of art, and a celebration of sight, sound and taste that paralleled the operas of Richard Wagner, from whom the concept originated. 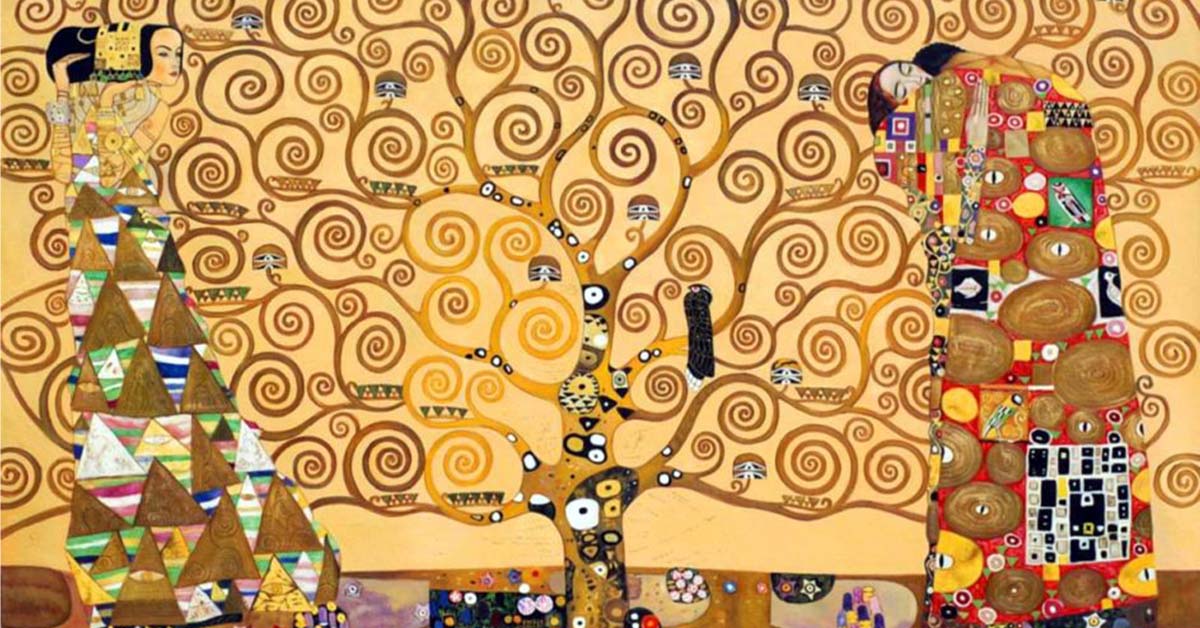 The Tree of Life, Gustav Klimt

Although the concept of the Gesamtkunstwerk fell out of favour in the post-modern period, it became a core tenet of art history, and today it provides food for thought in imagining what the ultimate home of the cross-collector might look like.

However, is cross-collecting a purely curatorial narrative or is it also a financial pragmatism? In recent years, cross-collecting has gained a strong recognition and validation from art market participants, from collectors to art dealers. Nowadays, the art fairs Tefaf and Masterpiece embrace the term by adapting it into their business models.

The first characteristics of cross-collecting in a commercial environment were first put forward by the Belgian art dealer Axel Vervoordt back in the 1980s. At the time Vervoordt began participating in art fairs, the galleries’ booths were “strongly consistent, boring and very bourgeois” (transcribed by Lindemann from an interview with Axel in the 80s (2010). Vervoordt’s booth stood out by mixing everything from artefacts to artworks and furniture in an intuitive way, reflecting his interests as a collector in an artistic manner in contrast to the static booths surrounding his. 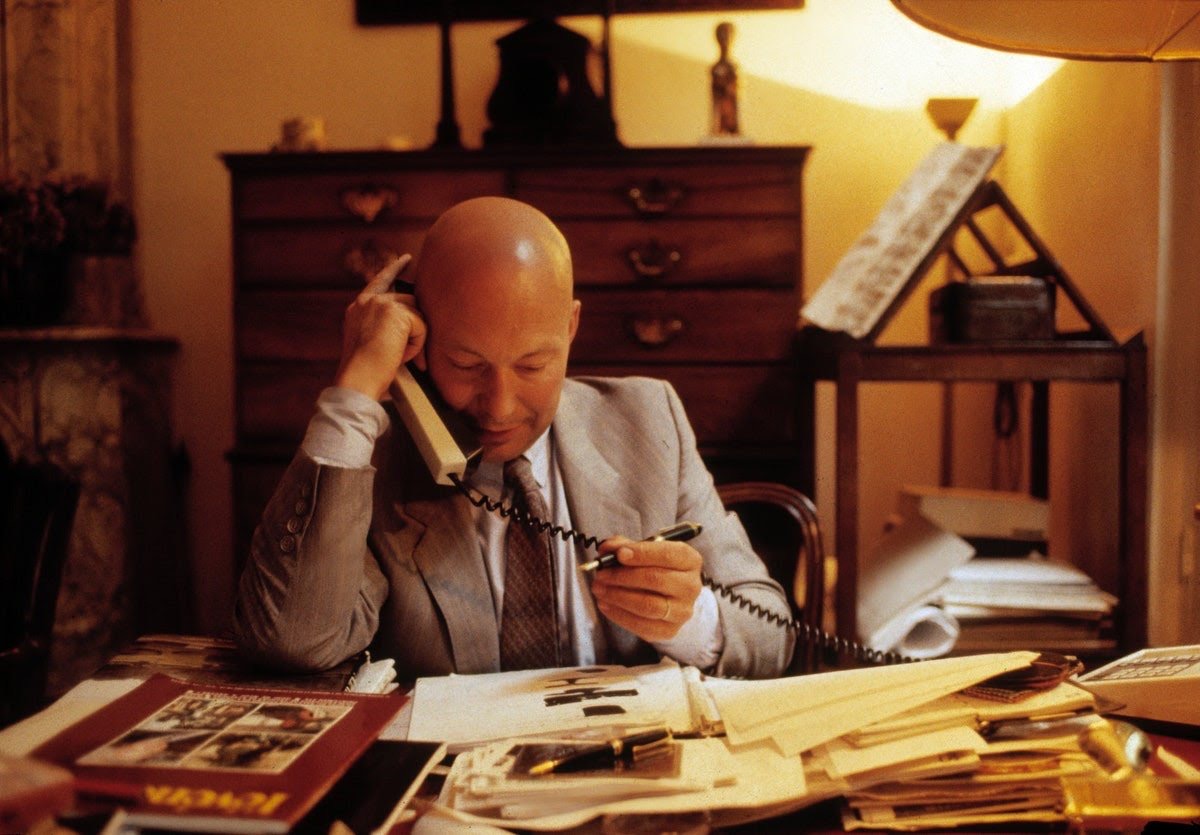 Vervoordt in his office in the 1980s

“I consider myself a very eclectic collector and dealer. I treasure the timeless and disdain the trendy. My taste spans centuries, continents and economic strata. I love the tension between different objects and different cultures. And I always let the space I am restoring inspire me.” – Axel Vervoordt.(Etherington-Smith, 2001)

As the trend seeps into the current 21st-century, the contemporary art market was starting to adapt the essence of cross-collecting to its curatorial narrative. Therefore,  dealers such as Helly Nahmad or Hauser & Wirth began to model their booths following these principles. Amongst the millennial generation, Lawrence Van Hagen leaves the concept of the empty white cube gallery from the 20th century by curating his What’s Up exhibitions in totally unexpected environments, mixing both art and design pieces from blue-chip to emerging artists from different cultural backgrounds. 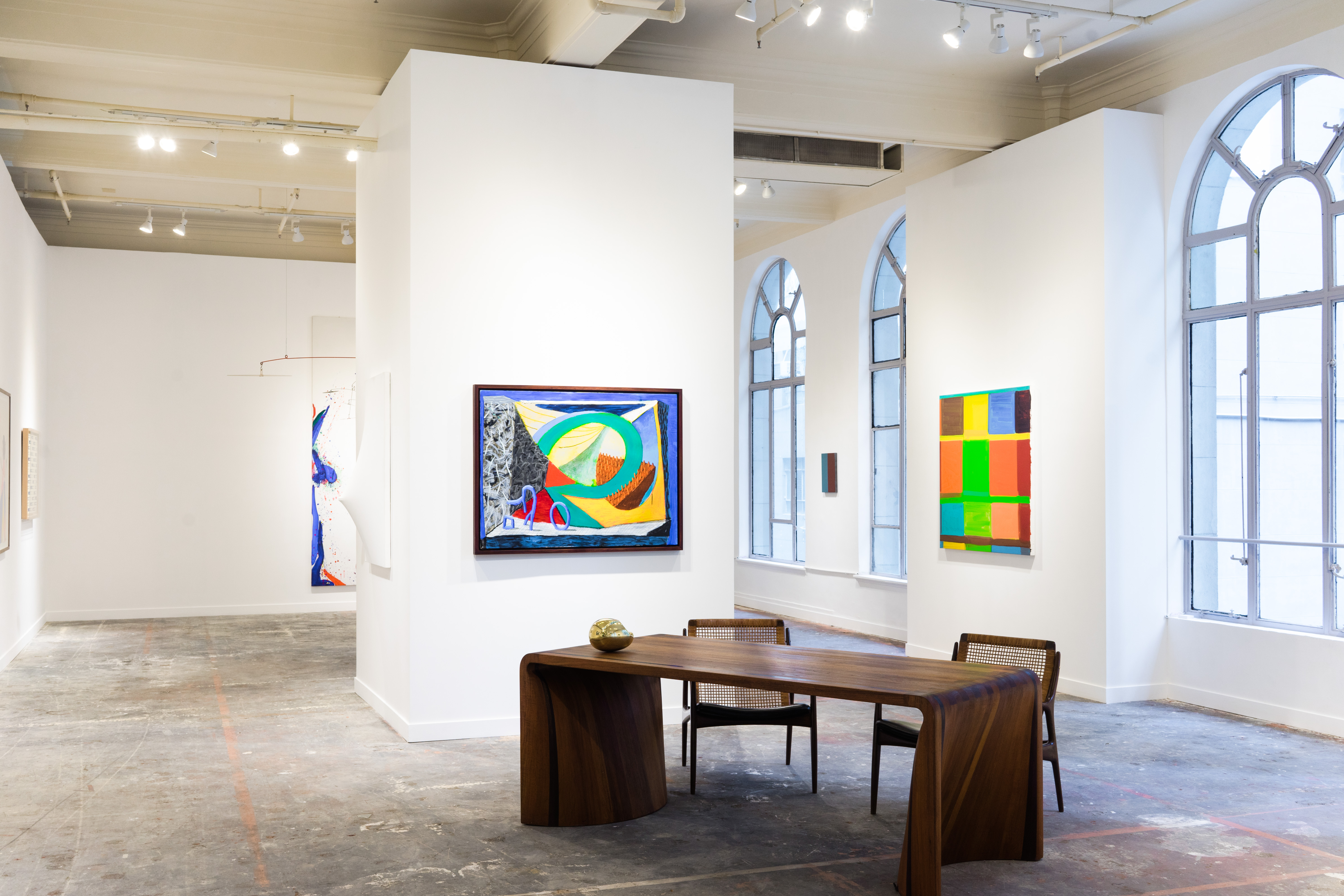 Moreover, the practice of cross-collecting could have an affiliation with investment objectives, such as the diversification of a portfolio. Motivating this rationale is the continuous rise of the art market, especially for the contemporary arts.

“Contemporary cross-collecting reflects the increasing crossovers between the financial world and the art market, with the creation of a mixed art collection mirroring the hedge fund portfolio: when one sector is underperforming, others tend to excel.”– David Bellingham (SIA MA Professor)

The beauty and the paradox here is that although cross-collecting began as curatorial practice, the diversified nature of this collecting behaviour leads to financial consideration for investment purposes. So we assume that by placing a blue-chip artwork in dialogue with a piece by a mid-career artist, or, likewise, by placing collectable design pieces next to artworks, the value of the collection as a whole will upsurge for its aesthetic significance and for its diversification. For this reason, cross-collecting could stimulate hedging. Although passionate collectors won’t deny that the essence of cross-collecting is mostly driven by intuitive passion.